audio
english translation at the bottom 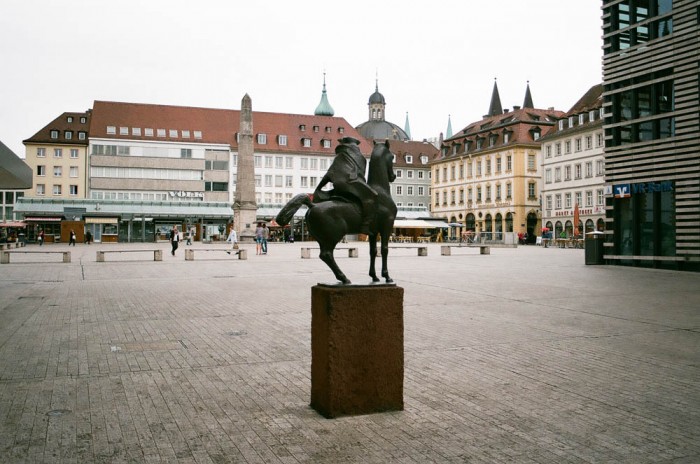 Dos cavalls alemanys a Valls is a meticulous description of two equestrian sculptures in the city of Würzburg in the south of Germany. The audio piece aims to uproot the horses and their cavaliers and transport them to Valls, a small town in Catalonia. At first glance, two voices seem to be portraying one animal. However, it soon becomes clear that they represent the positions and attitudes of two different horses. Two men are then described: each appears to accompany his horse in distinct ways. The text explores the signs and levels of subordination and complicity between these men and their animals. Furthermore, the two scenes happen to be cast in iron and stone and to be standing in public spaces. The description, unfolding as a minimal story, confronts the narrativity of the horses and their riders with their contemporary site-specificity and thus questions the means and codes of their representation. In a further attempt to reembody the two sculptures, the text was spoken alongside a living horse, the two separate scenes finally merging into one. 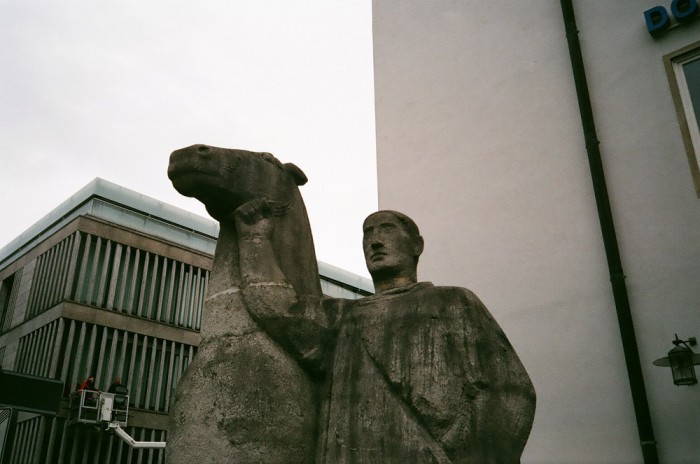 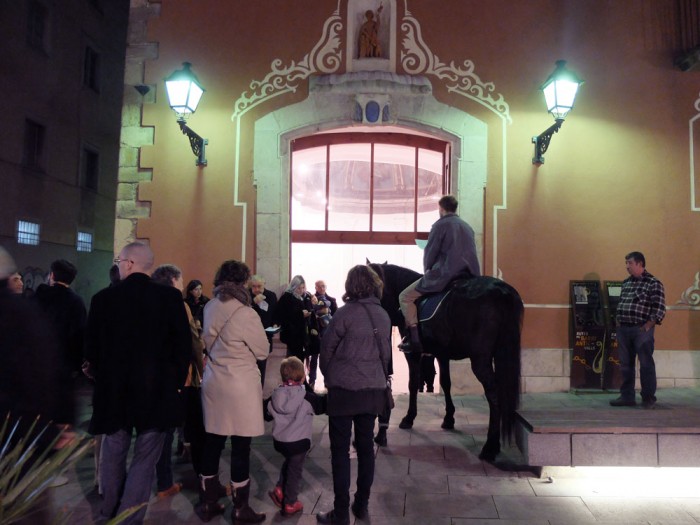 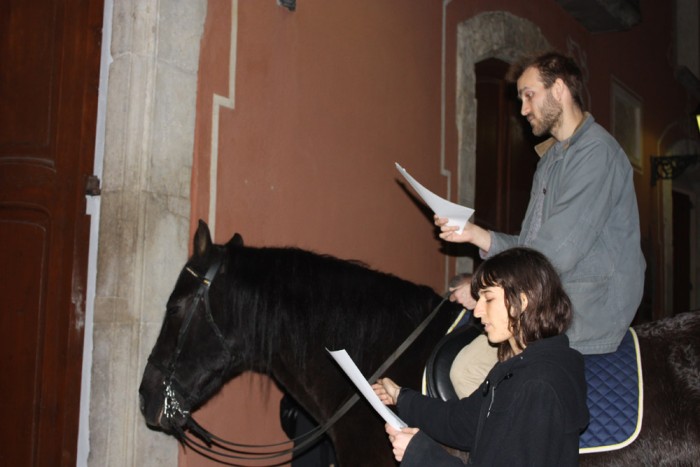 – Its ears are bent back.
– Its ears are raised, hieratic.
– It has a sturdy neck, stretched, following the direction
of its straighten body. The head is its continuation, carefully
directed forward.
– It has a straight and slender neck. The head, proud, follows
the same axis. It leans its nose lower, slightly to the
left. It casts a serious look.
– It does not seem to have a mane.
– Its hair is short and tastefully groomed.
– Its legs are still, all equally stretched. Small curves suggest
its muscles. None are shown more tensed than
the others. Its weight is evenly split four ways. The tail
hangs straight between its thighs.
– Its front legs are stretched, muscles tensed and shiny.
The back legs are half flexed and the tail just dangles.
The hooves are close to each other, almost converging
from four points. The only thing missing, as if rising
from the ground, is dust in the air.
– It is not a racing horse.
– It is not a draft horse.
– From the right side, we might have overlooked the man.
The width of the horse’s neck hides the man’s head.
– The man rides the horse. His right foot seems stuck in
the stirrup while the left one hangs over the left thigh of
the animal. His torso is bent backwards.
– The man is still, standing on his feet with his eyes looking
forward. His left arm hangs close to his body. The
left one is up, following that curve that the horse neck
draws so that his fist almost reaches the horse’s nose,
resting just under the head.
– This movement pulls the cape that he wears; under it,
his two hands are starting to be seen. His gaze and face
are turned towards his hands and get emphasized by
the shape of the hat he wears, a low crown tricorne. The
man is no soldier.
– He is no knight.
– He is no king.
– nor a general.
– nor Columbus.
– nor a dictator.
– Man and horse stand near each other. It is unclear who
leads whom. They perform a joint function. Are they
equally important? Are they inseparable? Which of the
two can be replaced?
– The two share more things than just trotting. The horse’s
nose shrinks; the man’s back widens.
– Tilt, impulse, pride. After each race, rider and horse look
even closer to each other.
– Can we ignore the hierarchy? The strap hides behind
the ear.
– Behind him, there stands a two-story bourgeois house decorated
with red-and-white coats of arms: the Castle-Bank.
– Behind them, there stands a stark four-story fifties architecture
with red letters on its front: the Ober-Bank.
– A wide-open square lies in front of him. Far above the
roofs, we can see the green tips of a church or a cathedral.
– A red stone and copper spiked church stands in front
of the man and the horse, On the right, there is a line of
trees whose shadow shelters a line of parked cars.
Man and horse hover half a meter above the ground.
– Legs rest on a rectangular red stone. A golden plate
hangs on the front.
– There is no break between the hooves, the soles and the
grey sandstone.
– An iron plate serves them as base. It seems impossible
to separate the plate from the horseshoes.
– To help the four legs of the animal support the weight
of its body two columns stand under the horse’s belly.
Its skin shows a strait cut in the neck, the same cut that
shows on the man’s clothing, just on the left arm sleeve.
Both bodies are made out of parts.
– They came from the same pouring, a dark and opaque
shape of molten metal trapped in a last spill.
– One could say that stones do not feel any pressure, that
they do not feel the weight. On an area of the man’s
clothes, however, there is a cut, a firm diagonal incision.
A depression like this only takes place when pressure
is exerted on a body. The pull of a strap marks the right
side of his back and stretches all the way to the left hand.
– He is holding the bag. He holds the strap with one hand
and the other rests on the buckle. Is he opening or closing
it? We do not know.
– The neck and the front legs are white. The nose, protruding
and half blackened, protects them from the rain.
Exhaust gases stain the rest of the body.
– He has just jumped on the horse, or he has just gotten
down. What has he brought? What has he taken? …a
message, a contact, a sentence, a conspiracy, an inheritance,
or maybe just stones?
– His stare goes across a shop window. Inside, there are
two models wearing jackets. They have not seen him.
The light of the shop window is turned on every night.
– The plaque only tells us the name of the patron, a bank.
It does not reveal to us the content of the bag or its
destination.
– A still hand gets heavy. Emptiness does too.